A couple years ago I read The Fountainhead by Ayn Rand. It’s roughly 700 pages long, feels strangely bleak most of the time, and talks a lot about architecture (not the most glowing review, I suppose). I didn’t hate it, but I haven’t exactly been itching to re-read it. However, there is one passage in it that I still think about all the time. Here it is:

“Katie, I wanted to marry you. It was the only thing I ever really wanted. And that’s the sin that can’t be forgiven—that I hadn’t done what I wanted. [. . . ] Why do they always teach us that it’s easy and evil to do what we want and that we need discipline to restrain ourselves? It’s the hardest thing in the world—to do what we want. And it takes the greatest kind of courage. I mean, what we really want. As I wanted to marry you. Not as I want to sleep with some woman or get drunk or get my name in the papers. Those things—they’re not even desires—they’re things people do to escape from desires—because it’s such a big responsibility, really to want something.”

It’s the hardest thing in the world—to do what we want. What we really, really want.

I love that line.

Here are a couple things that I really want. I want to write the best songs that I could possibly write: taking no shortcuts, never being satisfied with “good enough,” having each song “torn from my flesh” (to steal someone’s description of Townes Van Zandt’s music). And there are moments when I do that. But most of the time, some weaker part of myself wins out—the part that wants to look up old friends on Facebook and see what they look like now, the part that wants to watch a movie when I have a couple free hours in my afternoon. Like Rand says, these aren’t even desires, they are things we do to escape from our desires.

There is another thing I want. Yesterday I read an excerpt from one of my top 3 books of all time, Dostoevsky’s The Brothers Karamazov. An old monk named Zosima is recalling a story from his youth when he almost killed a man in a duel only to have his heart be changed at the last second. He yells out to his opponent (who thinks he is a coward), “Look around you at the gifts of God, the clear sky, the pure air, the tender grass, the birds. [. . . ] We don’t understand that life is heaven, for we have only to understand that and it will at once be fulfilled in all its beauty. We shall embrace each other and weep.”

I want that. I want to be so aware of the holiness of each moment that we couldn’t help but “embrace each other and weep,” to be overwhelmed by gladness (I’ve been thinking about the word “gladness” a lot lately) at the wonder of each breath, each word. But most of the time, that’s not where I am. I would rather avoid the awkwardness of staring into someone’s eyes for more than a second or two, I would rather talk about the weather or the price of gas than risk telling someone that I’m unspeakably glad to be alive. Most days, I would rather stay home than even attempt to muster the strength to interact with other people at all.

But every once in a while, in spite of all my shortcomings, I see what I really want and I am able to surrender to it. I am grateful for those moments. Ayn Rand was right, it is the hardest thing in the world. 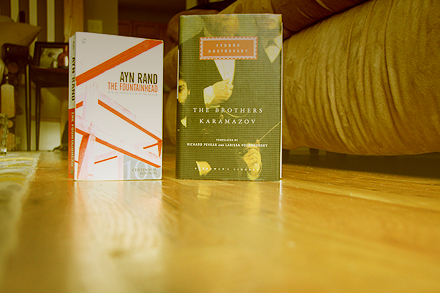